Trump to UN: ‘Rocket Man is on a suicide mission’ 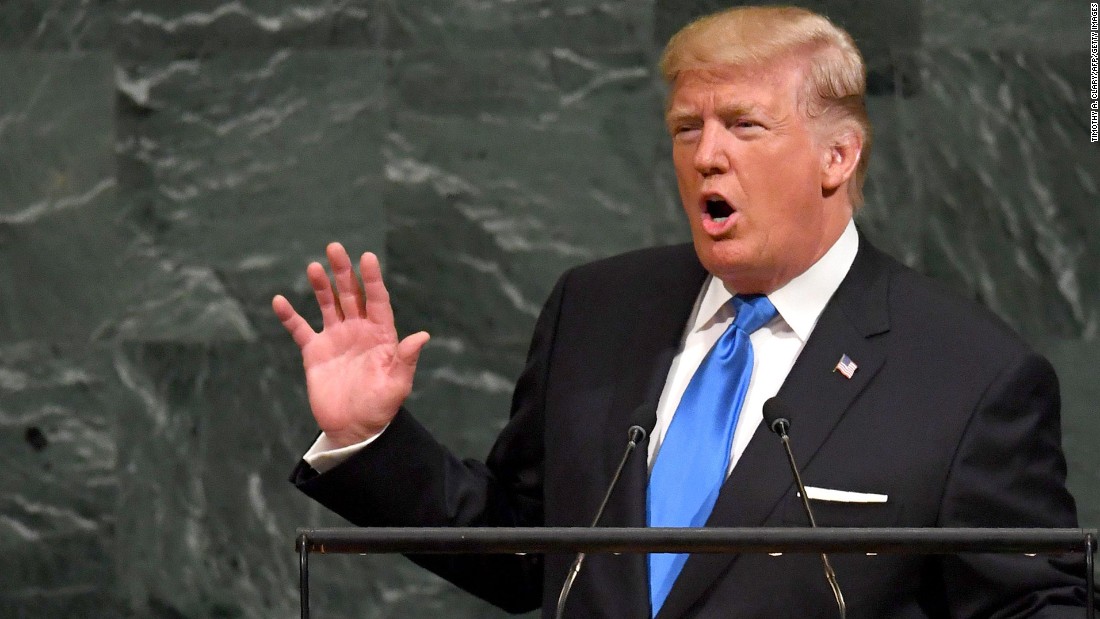 New York (CNN)President Donald Trump warned Tuesday that the US would “totally destroy North Korea” if forced to defend itself or its allies.

“The United States has great strength and patience, but if it is forced to defend itself or its allies, we will have no choice but to totally destroy North Korea,” Trump said during his first address to the UN General Assembly.
“It is time for North Korea to realize that its denuclearization is its only responsible future,” Trump said.
Trump also warned that Kim Jong Un — whom he again referred to as “rocket man” — “is on a suicide mission for himself.”
“Rocket Man is on a suicide mission for himself,” he said.
Trump’s strong words came after he made the case that North Korea is a “country that imperils the world” and said that it is in no country’s interest that North Korea continue on its current path of nuclear and ballistic missile development. 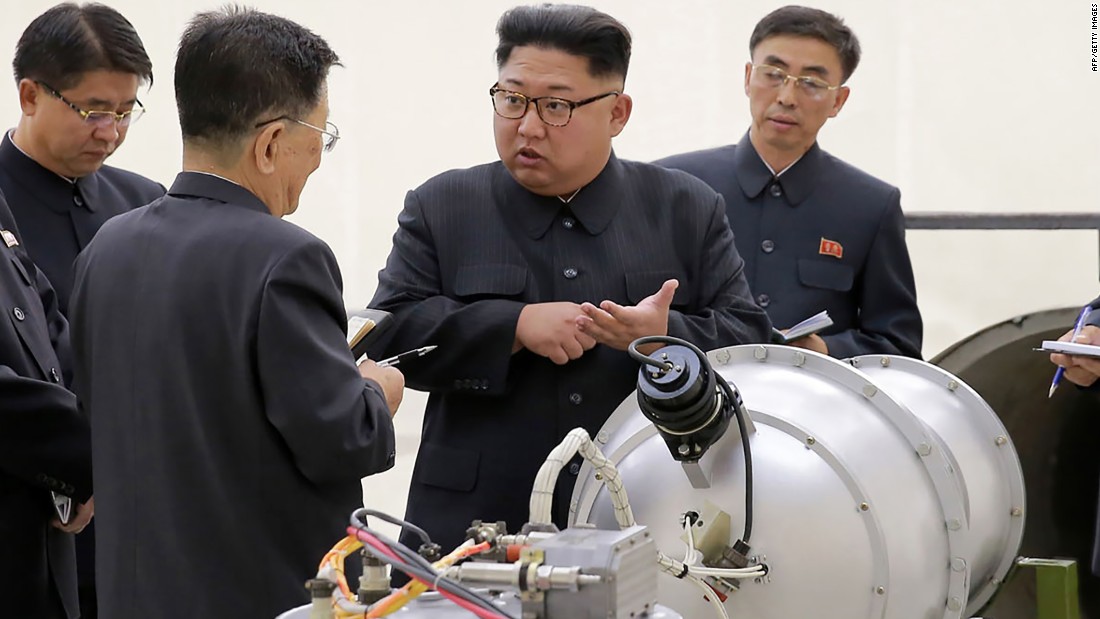 He also offered strong words for countries that trade and finance North Korea: “It is an outrage that some nations would not only trade with such a nation but would arm supply and financially support a country that imperils the world.”
Trump also suggested on Tuesday he plans to scrap the Iran nuclear deal, saying it was a mistake to enter into the agreement at all.
“The Iran deal was one of the worst and most one-sided transactions,” Trump said.
“That deal is embarrassment to the US and I don’t think you’ve heard the last of it, believe me,” Trump said, a sign he’s preparing to weaken the deal.
Trump faces a mid-October deadline for re-certifying Iran’s compliance with the agreement.
Trump noted that terrorists are gaining strength around the world but that peace is possible around the world.
“To put it simply, we meet at a time of both immense promise and great peril,” Trump said.
“Terrorists and extremists have gathered strength and spread to every region of the planet,” Trump said near the beginning of his remarks.
Trump stated bluntly that certain parts of the world are “going to hell,” suggesting it was within the UN’s power to reverse course.
“Major portions of the world are in conflict and some in fact are going to hell,” Trump said.
“The powerful people in this room, under the guidance and auspices of the United Nations can solve many of these vicious and complex problems,” Trump said.
He said the United States was prepared to combat global instability through military might.
“Our military will soon be the strongest it’s ever been,” he said. 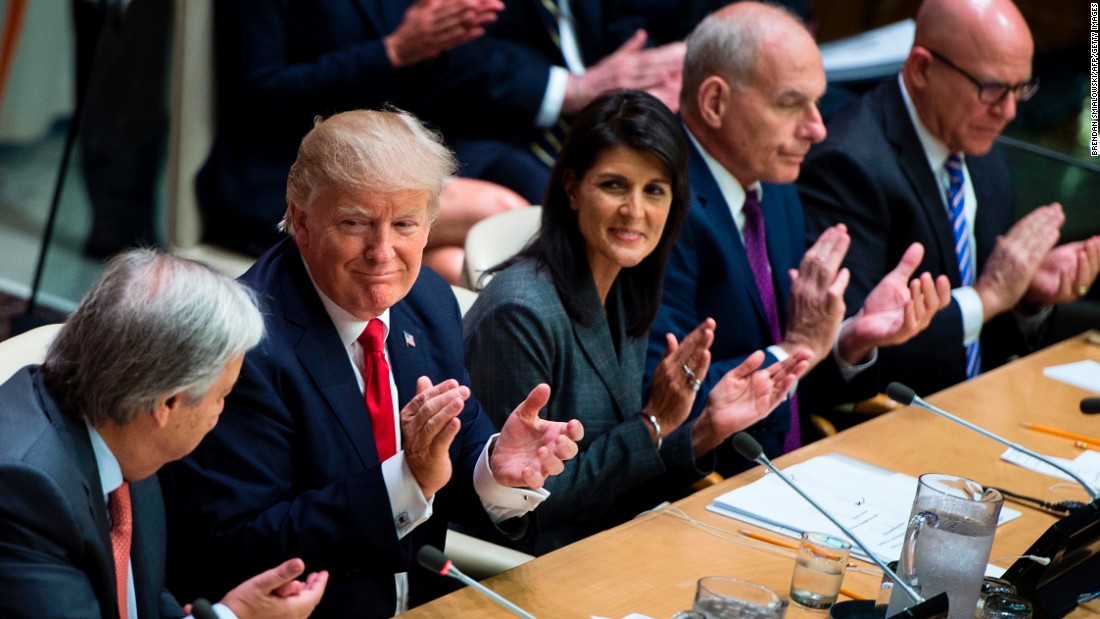 Trump told world leaders that he would not seek to insist their countries adopt US values.
“In America, we do not seek to impose our way of life on anyone, but rather to let it shine as an example for everyone to watch,” Trump said.
He said he would continue to place America’s interests ahead of other countries’, suggesting his counterparts do the same with their own populations.
“As President of the United States, I will always put America first,” he said. “All responsible leaders have an obligation to serve their own nations.”
Trump opened his remarks touting his economic record, a nod to his core campaign promises of prosperity at home ahead of a major foreign policy speech.
“The United States has done very well since Election Day last November 8,” Trump said. “The stock market is at an all-time high, a record. Unemployment is at its lowest level.”
He cited “regulatory and other reforms” for an economic boom.
Trump has delivered major foreign policy addresses before, to a gathering of Muslim leaders in Saudi Arabia and in a packed central square in Poland. But the issues at the United Nations are broader, and the geographic spread of Trump’s audience wider. His message here will resonate in capitals worldwide, where officials and leaders are still seeking a cohesive foreign policy doctrine from new American leader.
His speech is a “deeply philosophical address,” according to a senior administration official involved in its drafting, one that frames his foreign policy as a rational attempt to move countries toward working in their own self-interests.
“It’s an incredible moment and an enormous opportunity to demonstrate US leadership and US values,” the official said, saying that was “why (Trump) spent so much time honing and crafting this address to express that vision to the world.”
For a President whose election and elevation to the White House was among the most improbable in modern political history, the United Nations stage represents a presidential setting, even if some in the audience still find the sight of Trump in front of the iconic green marble jarring. Trump’s three eldest children — Donald Jr, Ivanka and Eric Trump — were expected to attend his speech, a source familiar told CNN.
Trump has offered a wide range of views on the UN in the past, most recently determining the body is underperforming and inefficient.
“In recent years, the United Nations has not reached its full potential because of bureaucracy and mismanagement,” Trump said Monday during a meeting about reforming the UN, his first remarks during a hurried week of diplomacy here. “We are not seeing the results in line with this investment.”
Despite the criticism, Trump has seen some of his top foreign policy victories emerge from the UN’s Security Council, which has passed rounds of sanctions on North Korea for its ballistic missile program.

Investments
politics, Trump to UN: 'Rocket Man is on a suicide mission' - CNNPolitics