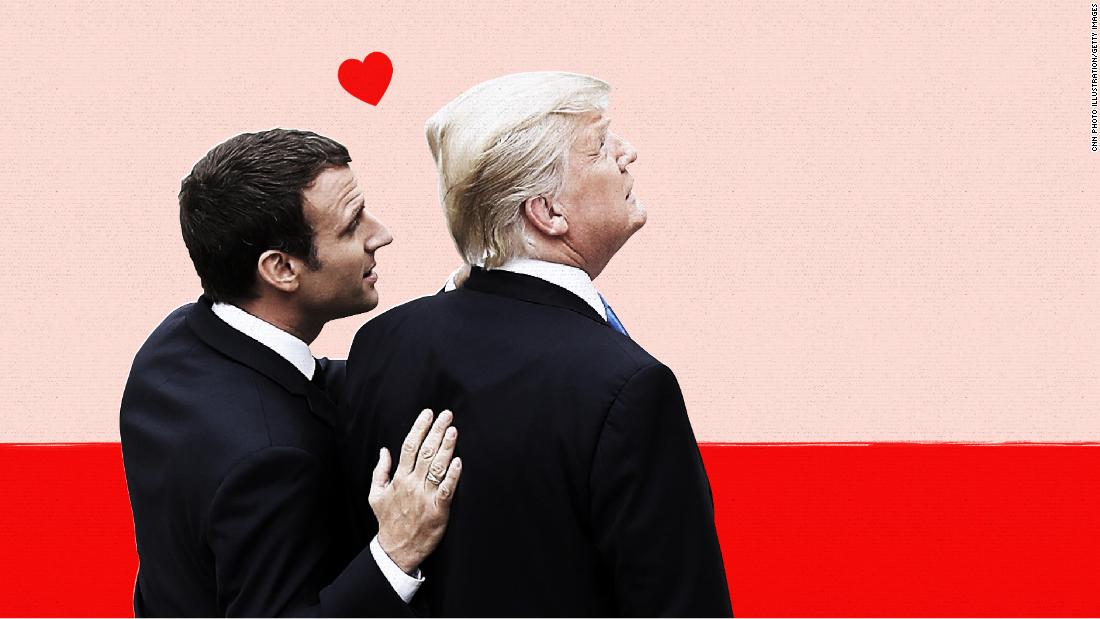 Paris (CNN)It was last July that US President Donald Trump laid bare the depth of his feelings for his French counterpart Emmanuel Macron.

Perhaps what appeared at first to be two men attempting to assert their own alpha male credentials was actually a sign of respect and admiration.
Whatever the case, by the time Trump left Paris after a whirlwind 36 hours that included a spectacular Bastille Day parade, he was sold on Macron.
“He’s a great guy. Smart. Strong. Loves holding my hand,” Trump told the New York Times after his visit to Paris.
“People don’t realize he loves holding my hand. And that’s good, as far as that goes.”
“I mean, really. He’s a very good person,” Trump went on. “And a tough guy, but look, he has to be. I think he is going to be a terrific president of France. But he does love holding my hand.”
Trump backed his comments up further in January when he afforded Macron the honor of being the first foreign leader invited for a state visit by the Trump administration.
The three-day visit, which begins on Monday, comes at a time when the pair are working to strengthen ties between their nations.

At first glance, the relationship between Trump, a 71-year-old isolationist who enjoys cable news and long days on the golf course, and the 40-year-old Macron, a pro-European integrationist who likes to quote philosophers and extol the virtues of the arts, seems unlikely.
Indeed, their relationship got off to a rocky start at last May’s NATO summit in Brussels, when Macron appeared to ignore Trump’s outstretched hand and greeted German Chancellor Angela Merkel instead.
When the two did eventually shake hands, it was one that went viral online, with neither man ceding any ground.
But looking beyond the handshake and the bravado, the two men share a number of similarities.
Both based their presidential campaigns on being outsiders and enemies of the political elite. They took advantage of the public’s dissatisfaction and disillusionment with mainstream political parties en route to winning their respective elections.
Trump, a real estate mogul, and Macron, a former investment banker, are both drawn to sealing good deals.
And they share a penchant for symbolism and showmanship, whether it be appearing on reality television or holding meetings amid the splendor of the Palace of Versailles.
And both men married women whom they are 24 years apart from — Melania Trump is almost 24 years younger than the US President, and Brigitte Trogneux is roughly 24 years older than Macron. 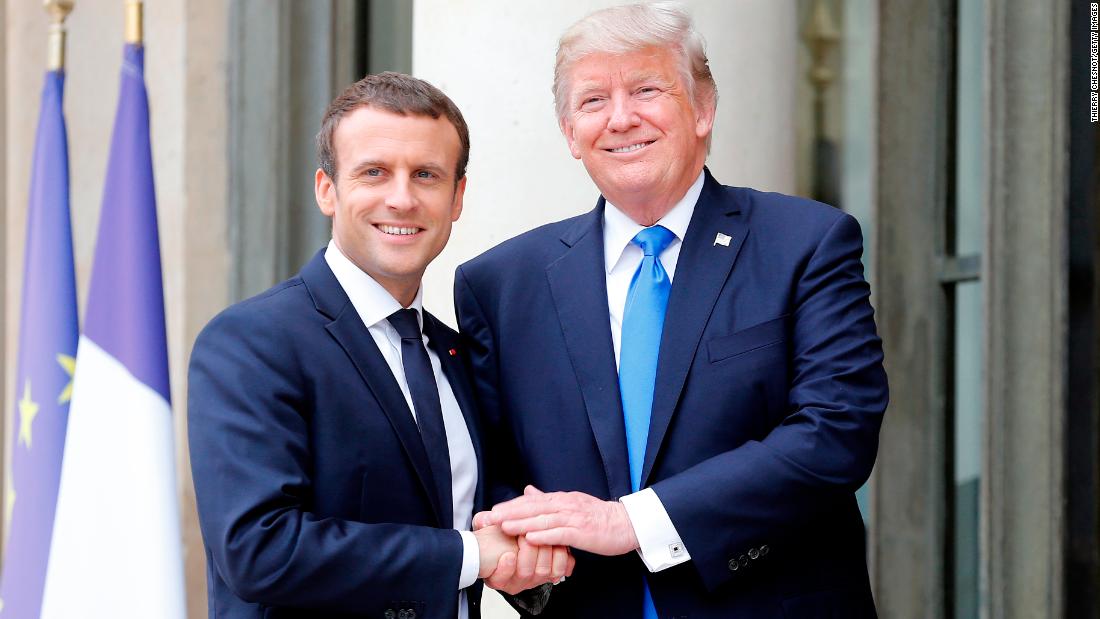 The pair also share views on policy, notably on eliminating ISIS and battling against global terrorism.
More recently, Trump and Macron have been working together on eliminating Syria’s chemical weapons capabilities.
This sense of potential cooperation has helped frame forthcoming talks as somewhat crucial, not only in terms of policy, but also in helping to reestablish what has been a historically strong US-France partnership.

For Macron, the stars have aligned. While British Prime Minister Theresa May has had to fend off criticism over her courtship of Trump, Macron has seen no need to hold back and has presented himself as Europe’s spokesman.
Trump is hardly popular in France, but Macron has faced little opposition to his decision to keep close ties with Washington and further his position as Trump’s “interpreter,” as aides have put it.
Macron has not been shy about criticizing Trump, most notably over the US decision to withdraw from the Paris climate accord and the American President’s derogatory comments about Africa.
While other European leaders have been reticent about indulging Trump, Macron has managed to cut through the noise. But his status as the European leader with perhaps the most influence in the White House will be put to the test this week on a number of fronts.
In an interview with Fox News that aired Sunday, the French President suggested it would be a mistake for Trump to ditch the nuclear deal with Iran, and urged his counterpart to continue to exempt Europe from tariffs.
“You cannot make a trade war with your allies,” Macron said. “It’s too complicated if you make war against everybody, you make trade war against China, trade war against Europe, war in Syria, war against Iran, it doesn’t work. You need allies.”
Trump has been an outspoken critic of the deal, agreed by his predecessor, to curtail Tehran’s nuclear ambitions, labeling it a “major embarrassment” for the US.
He has warned France, Britain and Germany that they must “fix the terrible flaws” of the agreement by May 12 or he would refuse to honor the sanctions relief Iran was promised.
Macron will make Europe’s case for remaining in the Joint Commission Plan of Action, the formal name for the Iran nuclear deal, with a failure to reach a deal likely to harm relations between the US and European Union.
In anticipation of his visit to Washington, Macron held talks with Merkel. Both leaders are keen to ensure that Trump extends a waiver for US tariffs on European steel and aluminum.
That may be difficult. Last month Trump launched a scathing attack on the EU, claiming its trade policies have “been brutal” to the US after announcing a 25% tariff on steel and 10% tariff on aluminum imports.
He added that the EU had “banded together in order to beat the United States in trade.”
Those comments caused an angry reaction in Europe, which will be hoping that Macron can change Trump’s mind.

Macron’s trip to the White House is likely to be a litmus test of his Trump strategy, as well as his ability to negotiate on behalf of French interests overseas. 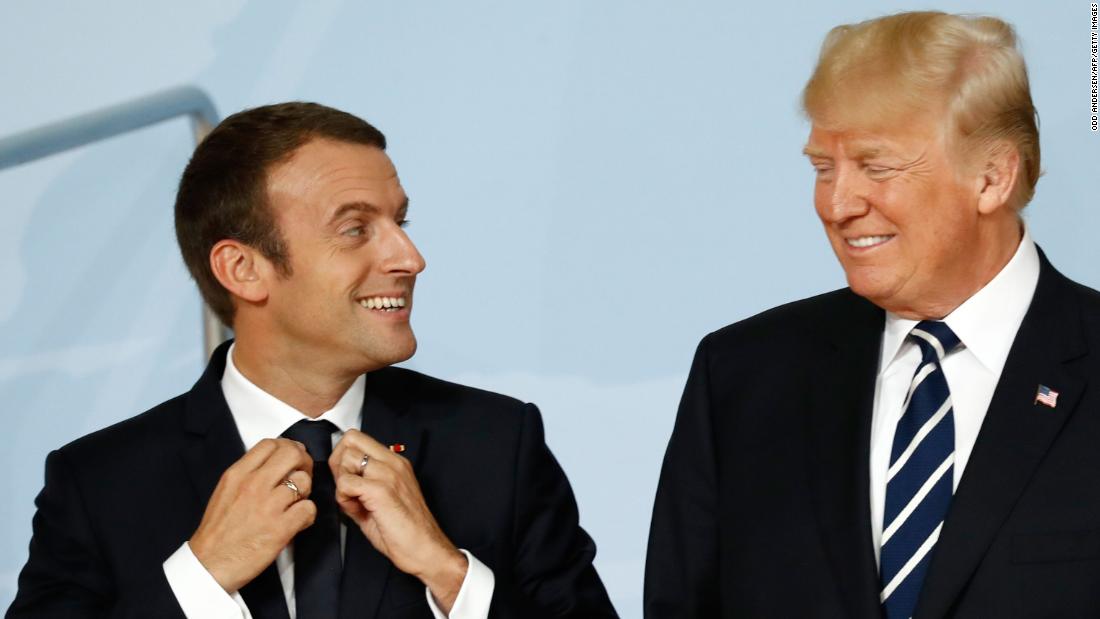 A year into his tenure as President, Macron has succeeded in reinforcing France’s status as — in Trump’s words — the “first and oldest ally” of the US. What is hard to miss is the fact that this new “special relationship” was forged by two political newcomers, both of whom are determined to shake up the system through a cult of personality.
The chemistry between the two men has propelled the partnership forward at a time when Trump has failed to forge a close bond with the leaders of the UK or Germany.
While May and Merkel look on, Macron has the opportunity to cement France’s place at the top table with the Trump administration and, in so doing, continue his pursuit of being Europe’s leading man.

Investments
Europe, Macron to put 'bromance' with Trump to the test during US visit - CNN