“It’s likely the pullback has further to go as investors adjust to more Fed tightening than currently assumed,” said Shane Oliver, Sydney-based global investment strategist at AMP Capital Investors Ltd., which oversees about A$179 billion ($141 billion). “The pullback is likely to be just an overdue correction, with say a 10 percent or so fall, rather than a severe bear market — providing the rise in bond yields is not too abrupt and recession is not imminent in the U.S. with profits continuing to rise.”

The re-pricing of markets has come as investors question whether the Federal Reserve will keep to a gradual pace of monetary tightening, and whether it may need to end up boosting interest rates by more than previously expected in coming years. A higher so-called terminal rate for the Fed’s target implies higher long-term yields — raising borrowing costs across the economy. 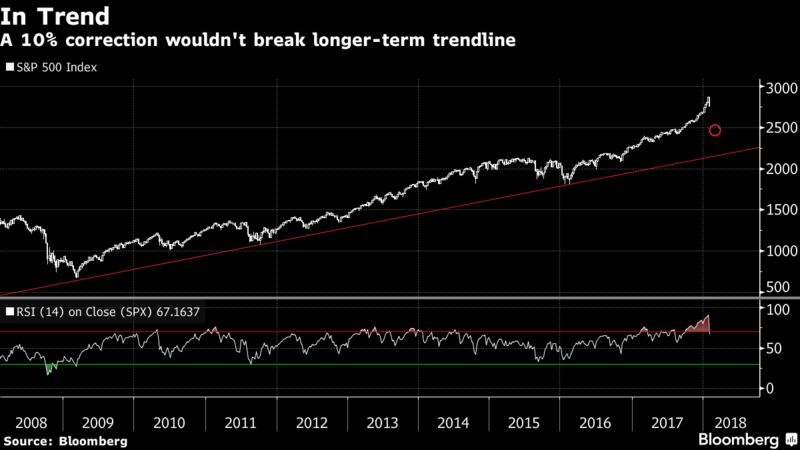 Yields on 10-year Treasuries have climbed to a four-year high from 2.40 percent at the start of the year. Last week’s decline for global stocks follows one of the best starts to a year on record amid hopes for ever-expanding corporate profits and growth in the world economy that’s broadening. The MSCI All Country World Index tumbled 3.4 percent last week, its biggest such slide since January 2016.

Elsewhere, oil extended declines after U.S. explorers raised the number of rigs drilling for crude to the most since August. Bitcoin dipped below $8,000.

Terminal users can read more in our markets blog.

Here are some key events scheduled for this week:

These are the main moves in markets: