Bitcoin Storms Back From Dip Below $10,000 in White-Knuckle Ride

Bitcoin’s wild start to 2018 turned breakneck on Wednesday, with the largest cryptocurrency plunging below $10,000 for the first time in six weeks before staging a rally to trade virtually unchanged.

The gyrations took the digital token across a trading range of more than $2,600 over 18 hours. Its tumble to a low of $9,186 pushed a monthlong rout past 50 percent and raised the specter that last year’s 1,400 percent rally was giving way to what many considered an inevitable bursting of the bubble.

Bitcoin rebounded $1,600 in the next four hours to trade at $10,780 as of 3:44 p.m. in New York, according to consolidated pricing data collated by Bloomberg. 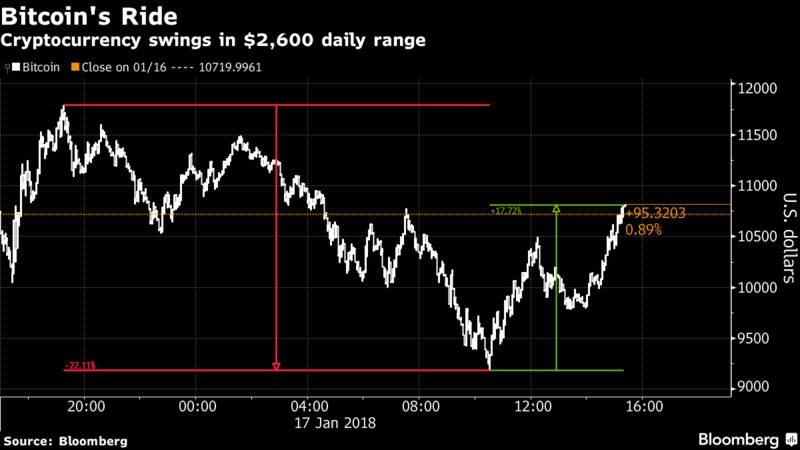 The drama Wednesday was sparked by increased scrutiny from regulators around the world that spread across the digital-coin realm in recent days, wiping out more than $300 billion in value just since Jan. 13. Bitcoin’s losses reached $140 billion from its record of $19,511 on Dec. 18. It’s still higher by 1,000 percent in the past year.
“Bitcoin was overbought and sentiment was ecstatic,” said Ari Paul, chief investment officer of BlockTower Capital Advisors. “This is an overdue correction triggered by South Korean regulation fears.”

In South Korea, a hotbed of trading, regulators warned they may shut down cryptocurrency exchanges completely after limiting their operations. China is said to have intensified its curbs on trading of the digital coins, extending restrictions to over-the-counter and peer-to-peer platforms after banning exchanges last year. In the U.S., the Securities and Exchange Commission asked at least 15 funds to pull applications this month for bitcoin-related exchange-traded funds.

That’s left speculators across the globe struggling to determine when or how market watchdogs may rein in an industry that is decentralized and derives much of its value from anonymous ownership.

“We get sell offs like this fairly regularly. I think this one is more pronounced and press-worthy since it is affecting more people and the dollars at stake are greater,” said Joe Van Hecke, managing partner at Chicago-based Grace Hall Trading LLC. “It’s a great time to evaluate which of these coins have staying power, actually have utility going forward, and invest in those.” 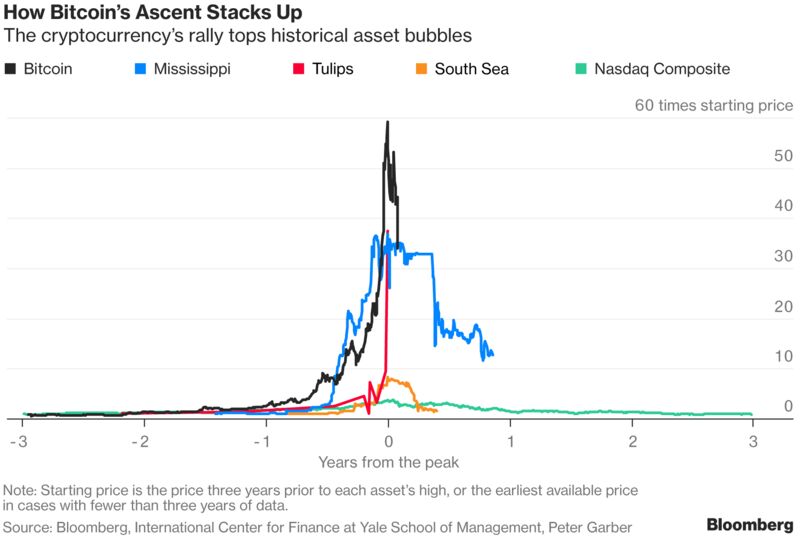 Souring the mood in the market, cryptocurrency exchange Bitconnect said it’s shutting down after receiving two cease-and-desist letters from state authorities for the unauthorized sale of securities and suffering from denial-of-service attacks, while one of the biggest trading platforms, Kraken, was offline for over a day last week as a scheduled update went awry.

In addition, some are blaming part of the rout on the Lunar New Year, as Asian traders cash out their cryptocurrencies to travel and buy gifts for the holiday that starts Feb. 16 this year.

The sell-off has been amid relatively high trading volume, with around 400,000 bitcoin exchanging hands on Jan. 15, the highest since Dec. 21, according to the latest data on Bitcoinity.org.

It wasn’t supposed to happen that way. When bitcoin futures started trading last month on CME Group Inc. and Cboe Global Markets Inc. exchanges, it triggered speculation that there would soon be a range of crypto ETF and mutual fund offerings. That in turn would draw hordes of new investors and lift bitcoin even higher.

For more on cryptocurrencies, check out the podcast:

Many assertions that digital coins represent a bubble have triggered double-digit selloffs over the past year, often to be followed by rebounds. It fell 26 percent in a week after reaching its peak in mid-December, only to rally 21 percent in the next 10 days. Since then, its posted only two gains in eight sessions.

Bitcoin’s market value has dropped to about $170 billion from a peak north of $310 billion. The December surge began after the U.S. Commodity Futures Trading Commission agreed to allow trading in bitcoin futures. The digital coin is still higher by almost 1,000 percent from a year ago.

"There are a great many investors that are excited to see Bitcoin below $10k as a second opportunity to enter at a price they feared they’d never see again," BlockTower’s Paul said.

For related news and information:
XBT Curncy GP for bitcoin
VCCY for a cryptocurrency monitor